March 31st is an important day in the Spiritualist movement calendar. Hydesville Day is celebrated as the anniversary of Modern Spiritualism as on this date, some 169 years ago, rappings were heard in a house in New York. The Fox family lived there with their three young daughters. This rappings were then identified as from spirit although it has been widely debated on its authenticity. Regardless, this recorded incident help to advance greater awareness of Spiritualism and Spirit communication to the public.

Spiritualism is the belief that spirits and humans can communicate through “Mediums”. Today although the main principles of the spiritualism as a “religion” cover the 7 principles, spiritualism means different things to different people. 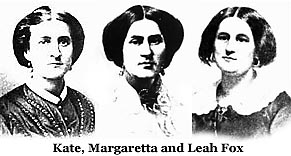 Spiritual communication is not a new experience. The Shamans, aboriginal people, medicine men and wise men and women have been able to feel, sense, hear and see Spirit. Over the years we have heard of witches being burned, spiritual gurus or even wise men who would have grown strong with power as they had a unique gift – were eventually penalised for their ability. A lot of this, in my humble opinion revolved around fear and power. Their “source” would have been keep a secret as mystery created an illusion of power and fear controlled people. There was no sharing of knowledge, no understanding of the Spirit world and even less, the evidence of life after death.

The Fox Sisters’s experience demonstrated physical contact and the willingness of Spirit to make their presence known. This sparked a debate and search for the truth and understanding. While people were at this time having similar experiences in a quiet way, the news of the sisters’s experiences spread and reached the UK. It had a large influence in the growth of Spiritualism in this country.

As a Medium, I would like to thank the sisters and the people who helped advance the spiritual movement. I am thankful as it opened me up to a new wonderful world of knowledge, discipline and understanding. There is a new era in spiritualism which is merging the teachings of the East with the West, tearing down the barriers to spiritual acceptance – FEAR and making spirituality part of modern life. The movement is working at snails pace but you can already see little signs – mindfulness and meditation is very much part of mainstream society. People are being “spiritual” without being aware of it. Meditation is now being introduced in schools, people are leaning towards mindfulness to help with their emotions. Soon the veil will lift and all will see the truth – that Spirit is always part of us and we are in fact all working together in the same path.

A little more on the Hydeville Experiment:

Beginning at around the middle of March, 1848, the Fox family began to be disturbed by the strange sounds and activities. The children were so alarmed at what was happening that they refused to sleep apart and were taken into the bedroom of their parents. The sounds were so loud, that the beds themselves often shook. Every possible opportunity was made to ascertain the source of the sounds, but to no avail. Finally, on March 31st, Kate Fox made history. She challenged the mysterious unseen power to repeat the snaps of her fingers.

To offer a more personal sense for what actually took place during this evening, we are presenting the content of a signed affidavit written by Mrs. Fox on April 4, 1848. As you read this, see if you can envision mentally what transpired:

“On the night of the first disturbance we all got up, lighted a candle and searched the entire house, the noises continuing during the time, and being heard near the same place. Although not very loud, it produced a jar of the bedsteads and chairs that could be felt when we were in bed. It was a tremendous motion, more than a sudden jar. We could feel the jar when standing on the floor. It continued on this night until we slept. I did not sleep until about twelve o’clock. On March 30th we were disturbed all night. The noises were heard in all parts of the house. My husband stationed himself outside of the door while I stood inside, and the knocks came on the door between us. We heard footsteps in the pantry, and walking downstairs; we could not rest, and I then concluded that the house must be haunted by some unhappy restless spirit. I had often heard of such things, but had never witnessed anything of the kind that I could not account for before. On Friday night, March 31st, 1848, we concluded to go to bed early and not permit ourselves to be disturbed by the noises, but try and get a night’s rest. My husband was here on all occasions, heard the noises, and helped search. It was very early when we went to bed on this night; hardly dark. I had been so broken of my rest I was almost sick. My husband had not gone to bed when we first heard the noises on this evening. I had just lain down. It commenced as usual. I knew it from all other noises I had ever heard before. The children, who slept in the other bed in the room, heard the rapping, and tried to make similar sounds by snapping their fingers.

“My youngest child, Cathie, said: ‘Mr. Splitfoot, do as I do,’ clapping her hands. The sound instantly followed her with the same number of raps. When she stopped, the sound ceased for a short time. Then Margaretta said, in sport, ‘Now, do just as I do. Count one, two, three, four,’ striking one hand against the other at the same time; and the raps came as before. She was afraid to repeat them. Then Cathie said in her childish simplicity, ‘Oh, mother, I know what it is. Tomorrow is April-fool day, and it’s somebody trying to fool us.’

“I then thought I could put a test that no one in the place could answer. I asked the noise to rap my different children’s ages, successively. Instantly, each one of my children’s ages was given correctly, pausing between them sufficiently long to individualize them until the seventh, at which a longer pause was made, and then three more emphatic raps were given, corresponding to the age of the little one that died, which was my youngest child.

“I then asked: ‘Is this a human being that answers my questions so correctly?’ There was no rap. I asked: ‘Is it a spirit? If it is, make two raps.’ Two sounds were given as soon as the request was made. I then said: ‘If it was an injured spirit, make two raps,’ which were instantly made, causing the house to tremble. I asked: ‘Were you injured in this house?’ The answer was given as before. ‘Is the person living that injured you?’ Answered by raps in the same manner. I ascertained by the same method that it was a man, aged thirty-one years, that he had been murdered in this house, and his remains were buried in the cellar; that his family consisted of a wife and five children, two sons and three daughters, all living at the time of his death, but that his wife had since died. I asked: ‘Will you continue to rap if I call my neighbors that they may hear it too?’ The raps were loud in the affirmative.

“My husband went and called in Mrs. Redfield, our nearest neighbor. She is a very candid woman. The girls were sitting up in bed clinging to each other and trembling with terror. I think I was as calm as I am now. Mrs. Redfield came immediately (this was about half-past seven), thinking she would have a laugh at the children. But when she saw them pale with fright, and nearly speechless, she was amazed, and believed there was something more serious than she had supposed. I asked a few questions for her, and was answered as before. He told her age exactly. She then called her husband, and the same questions were asked and answered.

“Then Mr. Redfield called in Mr. Duesler and wife, and several others. Mr. Duesler then called in Mr. and Mrs. Hyde, also Mr. and Mrs. Jewell. Mr. Duesler asked many questions, and received answers. I then named all the neighbors I could think of, and asked if any of them had injured him, and received no answer. Mr. Duesler then asked questions and received answers. He asked: ‘Were you murdered?’ Raps affirmative. ‘Can your murderer be brought to justice?’ No sound. ‘Can he be punished by the law?’ No answer. He then said: ‘If your murderer cannot be punished by the law, manifest it by raps,’ and the raps were made clearly and distinctly. In the same way, Mr. Duesler ascertained that he was murdered in the east bedroom about five years ago and that the murder was committed by a Mr. _______ on a Tuesday night at twelve o’clock; that he was murdered by having his throat cut with a butcher knife; that the body was taken down to the cellar; that it was not buried until the next night; that it was taken through the buttery, down the stairway, and that it was buried ten feet below the surface of the ground. It was also ascertained that he was murdered for his money, by raps affirmative.

“‘How much was it – one hundred?’ No rap. ‘Was it two hundred?’ etc., and when he mentioned five hundred the raps replied in the affirmative.

“Many called in who were fishing in the creek, and all heard the same questions and answers. Many remained in the house all night. I and my children left the house. My husband remained in the house with Mr. Redfield all night. On the next Saturday the house was filled to overflowing. There were no sounds heard during the day, but they commenced again in the evening. It was said that there were over three hundred persons present at the time. On Sunday morning the noises were heard throughout the day by all who came to the house.

“On Saturday night, April 1st, they commenced digging in the cellar; they dug until they came to water, and then gave it up. The noise was not heard on Sunday evening nor during the night. Stephen B. Smith and wife (my daughter Marie), and my son David S. Fox and wife, slept in the room this night.

“I heard nothing since that time until yesterday. In the forenoon of yesterday there were several questions answered in the usual way by rapping. I have heard the noises several times today.

“I am not a believer in haunted houses or supernatural appearances. I am very sorry that there has been so much excitement about it. It has been a great deal of trouble to us. It was our misfortune to live here at this time; but I am willing and anxious that the truth should be known, and that a true statement should be made. I cannot account for these noises; all that I know is that they have been heard repeatedly, as I have stated. I have heard this rapping again this (Tuesday) morning, April 4. My children also heard it.

“I certify that the foregoing statement has been read to me, and that the same is true; and that I should be willing to take my oath that it is so, if necessary.”