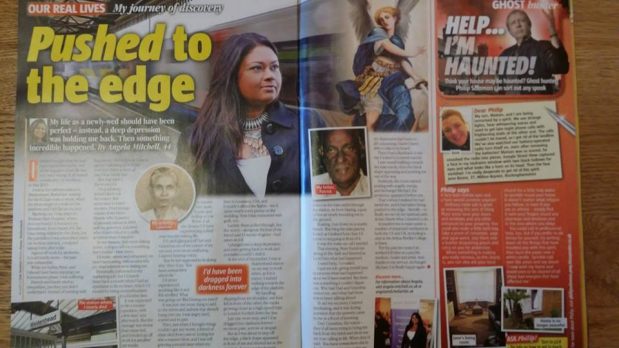 In November’s issue of Fate & Fortune magazine, you will see a centre spread on someone you know…..ME! I was approached to speak about how I became a Medium or my journey rather. After a considerable amount of pondering as I didn’t want it to be sensationalist type of journalism as it wasn’t you usual story. It is not that I started suddenly seeing spirits. On the contrary, I was well aware of them as a toddler but realised they were in fact spirits at the tender age of 10. I struggled with this awareness for almost all of my life. I hated this gift but I also helped people along the way. I didn’t have anyone to help me understand it or mentor me so I was doing things properly. These days we have articles, workshops, teachers and information at the click of the “search” button. When I was growing up, spirits were always seen as scary, evil and negative while mediums were often manipulative and untrustworthy. I should know as I went to see almost every medium in Malaysia as my mother was alwayis searching for help and answers. But in turn I was sexually molested by one, made to drink chicken blood by another, cheated out of money and another one encouraged my parents to destroy all of my artwork and paintings in the 90’s as he claimed it was all “evil”.

The scariest experience I had was with a medium/holyman who decided I was indeed possessed and therefore arranged for a ceremony to rid me of the evil spirit. All I had done was accompany a work mate who was trying to get extra magic to get her food business she ran on the side with her husband, successful. As I sat there, I felt a weird presence in the room and next thing I know I fainted and I woke up to him saying I was possessed. I was held down and all sorts of weird things being said. As you can imagine, I was incredibly scared and concerned that this “spirit” was the cause of some bad luck in my life. I went home and told my family and they too were anxious and agreed to the ceremony. On the said day we walked into the room, terrified and felt we were at the mercy of this man and his assistants. They asked me to lie down I felt very weak and I felt a blackness come over me as the holyman continued to chant. I think I fell into a deep sleep or lost consciousness but I think I was also given something to drink beforehand. Next thing I know, as I started to regain consciousness, I couldn’t move. My hands, legs and even my head was being held down by loads of men. I could hear the man chanting away and giving instructions to not let me go as apparently the “devil will want to resist and get up”. I also felt someone pricking my feet with a sharp pencil and my toe was in agony. This is a very unnatural and terrifying moment. I wasn’t prepared for what happened next.

Surrounded by strange men and unable to move, I begin to cry and tried to call for my family. Next thing I knew, water started pouring water on my face. I couldn’t breathe and as I had my mouth open, I started choking on the water. There must have been seven to eight men holding me down and I could see three standing above me with one litre bottles of water continuously pouring water on my face. I screamed as loudly as I could, gargling and choking sounds in between for my family. Each time I did, more water would be poured down to my face. I knew if I didn’t do something that I would drown and die within seconds. “Bobbbbby……save me….this is Angie”  I choked out.

I heard the holyman say “its the devil hahhaha…..nice try, don’t listen to it. Its very clever trying to make us believe its her” and I screamed “Nooooo its me” and I heard my mother screaming to be let inside the room. I heard her say to my friend “She is going to die…..I thought you were her friend” and then I heard my father push in shouted at the man to stop. I cannot tell you how relieved I was as I was already starting to feel dizzy and had so much water in my nose, mouth and throat that I knew with certain that a second more I would could have died on that cold cemented floor.

I never spoke to that friend again nor did I seek the help of a charlatan ever again. She did nothing to help me and in fact stopped my family from entering the room. She shrugged off the whole thing and didn’t seem to understand how scared I was. I shut myself out from spiritual matters and focused on went to temples or churches. My bad luck were merely challenges who made me who I am and they were certainly nothing to do with curses or spells.

So for many years I set aside my spirituality and hated it. This didn’t mean that they stopped appearing or speaking to me. In fact they became more obvious as the years went by. I would get prophetic dreams, messages, signs, see, hear and sense spirit wherever I went. I helped friends, cleared houses, read cards and would get strong feelings about people or situations. People were at times grateful, overwhelmed or scared off. No one really likes someone who “knows” things especially if they are insecure. I wasn’t trained so I went bumbling around life with this burden around my shoulders.

In September 2013 my life changed, for the better. What I resisted for my whole life came right at me and I was smacked in the face literally to face up to who I was! Sometimes you have to be pushed to the edge to see the truth. I stopped fearing spirits and embraced my calling. 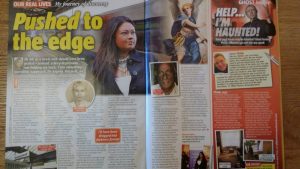 This is the driving force behind my psychic and mediumship workshops. You don’t have to walk through life feeling as though your gifts and abilities are a burden. You don’t have to be scared of spirits. I hope my story has inspired you. Please feel free if you want to ask any questions and if you want information about my next workshop.